On Thursday, 3rd May 2018, CountyClean Group’s leading lady and co-founder, Debbie Walker, took to the skies in Salisbury, Wiltshire to skydive from a 15,000 foot height with the aim of raising awareness and as much as she could for Eastbourne based caregiving charity St Wilfrid’s Hospice.

Upon completing the induction and British Parachute Association approved specialist training provided by GoSkyDive at Salisbury, the intrepid group of tandem sky divers gathered in the departure area before alighting the Cessna Super Cargomaster aircraft, which is the fastest tandem skydiving aircraft in the UK, to fly straight up in the sky to 2.8miles (15,000 ft).

Climbing up to 3000ft per minute on the scenic flight, the jump altitude was reached within around 10 minutes at which point the tandem launch was ready to commence. Debbie was very calm and showed no nerves at all, but once in the air her adrenaline kicked in. Having already been kitted out with a tandem skydive jumpsuit and safety harness on the ground, the pre-skydive checklist was completed and then the real countdown began with Alex her experienced tandem master, until all of a sudden they were free falling!

Thanks to GoSkyDive’s awesome media team, Debbie’s skydiving highlights were captured – just be prepared for a thrilling ride!

Reaching speeds of up to 125mph, Debbie revelled in the sunny skies and gracefully took in the views of the amazing Wiltshire countryside below which includes prehistorically important places such as the world heritage site of Stonehenge. At 5000 ft the parachute was deployed to slow their descent to about 30mph so that Debbie could enjoy the magical journey down to the landing area.

After 60 seconds of free falling through the sky and a further few minutes gliding down after the shoot had opened, they landed safely within the skydiving dropzone, but Debbie (being a bit of an adrenaline junkie) had enjoyed the extraordinary rush so much that she decided to take the skies again and jump a second time! 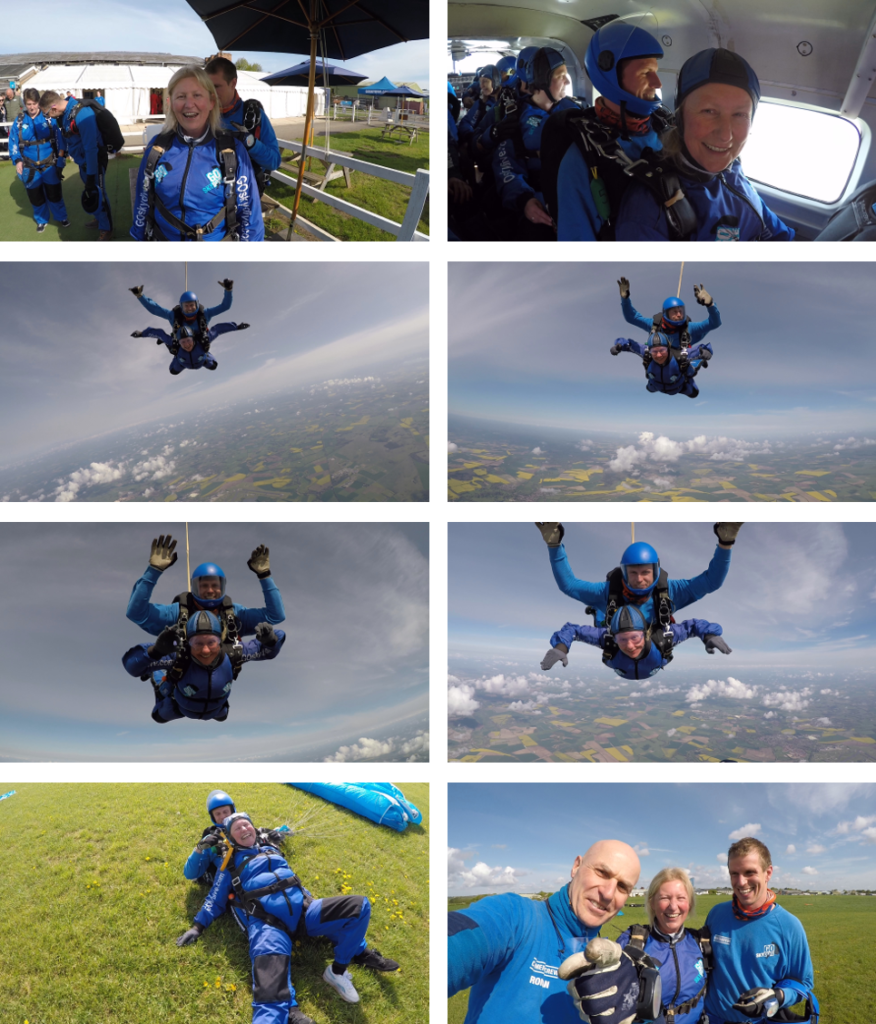 Speaking about her experience, Debbie said: “Honestly, it was so amazing from lift off to landing, I just wanted to get back in the plane and do it all over again! The rush was so thrilling, the views spectacular and I have never felt so free. I cannot compliment Alex and the GoSkyDive team enough for their superb training and ability to keep everyone calm throughout. Thank you to those who have supported me and donated through my fundraising page for St Wilfrid’s Hospice. It is an organisation very dear to me, so if you haven’t done so already, please donate.”

For over 35 years St Wilfrid’s Hospice has been providing specialist care for people throughout East Sussex with any progressive, advanced life-limiting illness. The charity provides invaluable support to families and friends and has an overall CQC rating of outstanding. All services are provided free of charge however they need our help to raise 70% to cover annual running costs of over £5 million.

Debbie was not alone in the experience as she had Mike and family with her on the day for moral support and to celebrate her sky diving successes with a refreshing drink after all the excitement. What an amazing feat; everyone at CountyClean congratulates Debbie for completing one of the most awe inspiring charity fundraising activities to date, not once but twice!