2020 may not have turned out how everybody thought it would, nevertheless it has still been a year filled with great excitement for CountyClean.

Despite Covid-19 and two national lockdowns, CountyClean was able to pull through this extremely tough year due to the ongoing need for essential services, and for that, the group is extremely grateful.

The continuous operation of the 24/7 environmental services company allowed CountyClean to carry on with fleet and equipment investments and the hiring of new staff. The hard-working team has still even managed to accomplish countless achievements throughout the year.

This year has proved more important than ever to think of others. CountyClean felt it was essential to carry on taking part in events throughout the year to support charities and their missions.

In September, both office and operations staff took part in the Macmillan Coffee Morning where delicious cakes were generously brought in to be sold. The team managed to raise £280 which was very kindly topped up to £400 by Debbie and Mike Walker.

In October, the office team took part in Breast Cancer Now’s #WearItPink Day where an incredible £700 was raised by staff and friends!

Finally, in December, CountyClean hosted their annual Christmas Jumper Day. This year it was in support of the Kent, Surrey and Sussex Air Ambulance Service where £335 was raised.

On the operations side of the business, Ronnie Platt joined the Pump Services team as an Engineer and Sean McQuillan joined as an Operative. Since joining, both have passed a variety of training courses, the group are also putting Sean through his HGV training and tests to gain his license in 2021 as another one of CountyClean’s younger drivers. As usual, the whole Operations team have undergone industry related and vehicle training courses which enable them to carry out CountyClean’s diverse range of services.

There were also a few internal promotions throughout the year, Simon Collier-Luxford was promoted from Operative/HGV Driver to Operations Supervisor and Nathan Douch was offered the position of Pump Services Supervisor, stepping up from a Pump Engineer. Both of these individuals consistently show vigour and were offered new roles with greater responsibility in recognition of their hard work.

In the office, two new additions to the sales team were welcomed. Firstly, Harry Walker made the transition from the operational side of the business in July to Business Development Executive with exceptional knowledge and first-hand experience of CountyClean’s services. Secondly, in August, Josh Jones joined also the group as a Business Development Executive bringing with him three years of technical sales knowledge into a completely new industry. Josh was quick to prove himself through his ability to grasp all of CountyClean’s services and the workings of their specialist fleet.

2020 also saw the arrival of some new vehicles! Ensuring the arrival of these new vehicles is a part of CountyClean’s ongoing fleet investment plans to make sure customers are only sent the latest and highest specified equipment. This guarantees the delivery of quick, efficient and hassle-free services.

Throughout the year, four new vacuum tankers arrived. The smallest was a 3,000 gallon capacity six-wheeled unit which will assist with jobs where access is difficult. The two middle vehicles were eight-wheeled units and have capacities of 4,000 gallons. The last and largest of the new units was an articulated ADR vacuum tanker with a capacity of 6,000 gallons, ready to assist with the collection of various types of hazardous waste.

The group also welcomed a set of three new Pump Services vans throughout the year. These units are fully equipped with a comprehensive stock of spare parts which support the Pump Engineers in the installation, servicing and maintenance of sewage treatment plants and pumping stations. 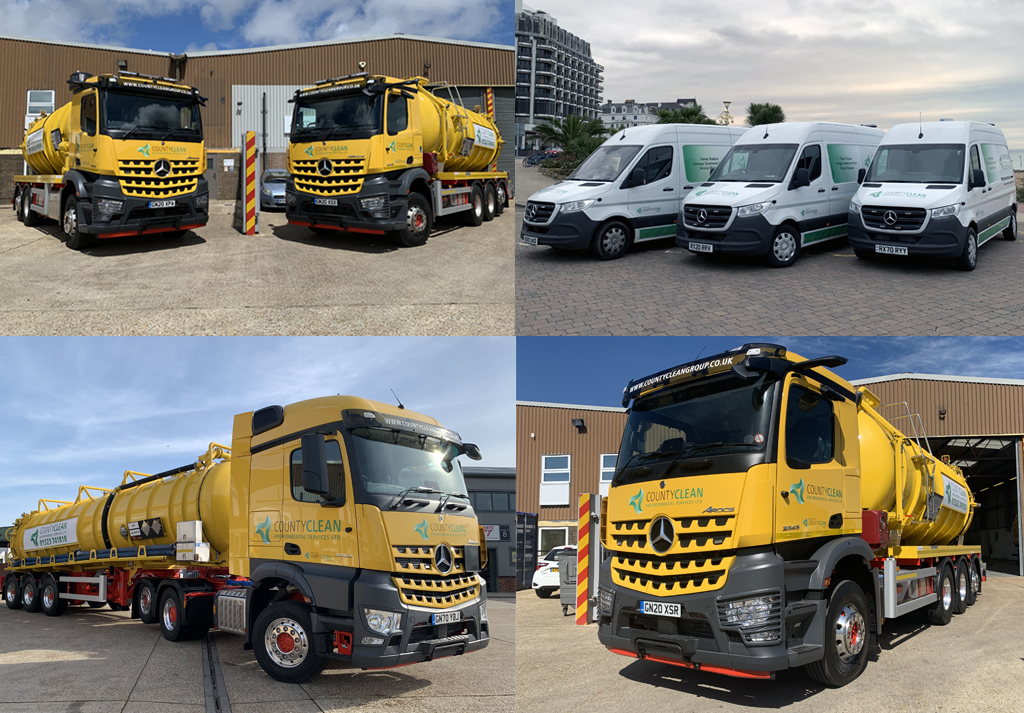 CountyClean was pleased to expand the size of their vehicle depot through the acquisition of the unit next door to the current site adding 20,000sq ft to the premises. The addition of the unit is to accommodate the group’s growing fleet of highly specified vehicles.

The group also attained a satellite office which is based at Brighton City Airport to aid the group’s expansion. The field office will be used for meetings by staff and customers from West Sussex and Hampshire to allow easier access.

We would love to thank our staff and suppliers for all their hard work and to thank our friends and loyal customers (old and new) for all their support shown over 2020, we look forward to continuing these relationships in 2021 and beyond.

As per normal we do not close for Christmas and are available 24/7 in case of any emergencies should they arise.

Finally, we would like to wish everybody a Merry Christmas and all the best for 2021 with the hope of returning to some normalcy!