The infamous fatbergs which have been found in sewers all over Britain are masses made up of congealed fat, grease, oil, wet wipes and nappies have an even more menacing cousin…the ‘concreteberg’.

These aggregations are caused by people pouring concrete and washings into sewers which in turn then sets in the underground sewer system and becomes rock-hard severely restricting and even blocking the drainage system.

In 2019 the largest concreteberg ever found was discovered beneath London. The mass weighed 105 tonnes – which is as heavy as a blue whale! The concreteberg was blocking a total length of 100 metres in three sewer lines.

To break up the rock hard concreteberg, a range of tools were used including a jackhammer, pneumatic drills and high-pressure water jets, it took around two months to remove and clear the blockage.

The CountyClean Group has helped to clear blockages of all sizes in sewer and drainage systems, including a 15 tonne bus-sized fatberg for Thames Water in Surrey. Due to a huge number of wet wipes mixing with tonnes of food waste the sewer flow was reduced to just 5 per cent of its normal capacity.

Our experienced and skilled teams cleared the blockage quickly and efficiently with our Kroll Combination Units and continued to assist Thames Water over several weeks to remove the remaining grease and debris in their sewer pipelines.

During the cleansing process, our state of the art mainline CCTV camera unit was utilised to survey and monitor the sewer, as well as highlighting additional previously unknown issues with the brickwork. Following the survey, a full WinCan CCTV report was created on site and immediately sent to Thames Water highlighting remediation works that were required. 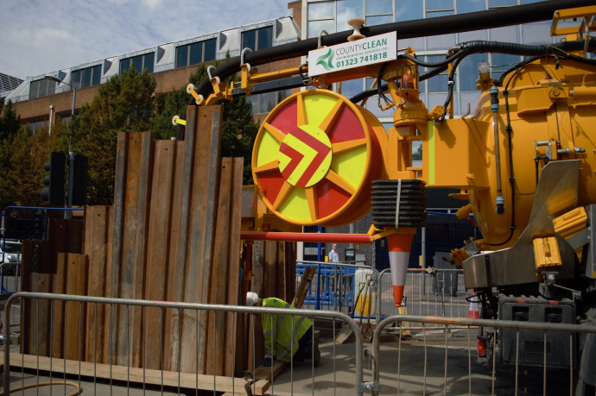 It is imperative that everybody is conscious and aware of what can and cannot be put into drains. Non bio-degradable items may flush away but have a negative effect in sewers further down the line. In another article, we explain in further detail which items are flushable and how we can all do our part to reduce the number of sewage blockages caused.

If you have any questions or need advice about concretebergs, fatbergs or any other queries regarding drainage systems please do not hesitate to get in contact with us on 01323 741818 or 0800 171 2204. Alternatively, you can leave your details in our contact form and one of the team will get back to you shortly.